ilkyaz Şubat 12, 2019
Visitors to the 1889 Exposition Universelle in Paris entered the fairgrounds under the shadow of the newly-built Eiffel Tower—a gleaming marvel of wrought iron lattice that stretched almost a thousand feet into the air. Once inside, they could gawk at a massive reconstruction of the Bastille or gasp as Annie Oakley demonstrated her legendary marksmanship in Buffalo Bill’s Wild West show.
Amidst this myriad of spectacles was a rather less dramatic—but no less influential—innovation from a Czech manufacturing company named Hardtmuth Pencil. Its latest creation was formed, as all pencils are, of a graphite core housed in a protective wooden sheath. What stood out was its color—Hardtmuth’s “luxury pencil” was painted yellow.
Prior to 1889, the highest-quality pencils were left “natural polished.” Manufacturers usually painted their pencils if they were looking to cover up imperfections in the wood. Accordingly, typical paint colors were dark: purple, red, maroon, or black.
But Hardtmuth was looking for a way to advertise the caliber of its graphite rather than its wood. “For a long time the best graphite came from the west—England, in particular,” explained Duke University professor Henry Petroski, author of The Pencil: A History of Design and Circumstance. (The very first graphite deposit was discovered in Borrowdale, England, in 1564, centuries before yellow pencils arrived on the scene.) Although the British supply of graphite eventually ran out, soon “a new and superior source was found in Siberia.” 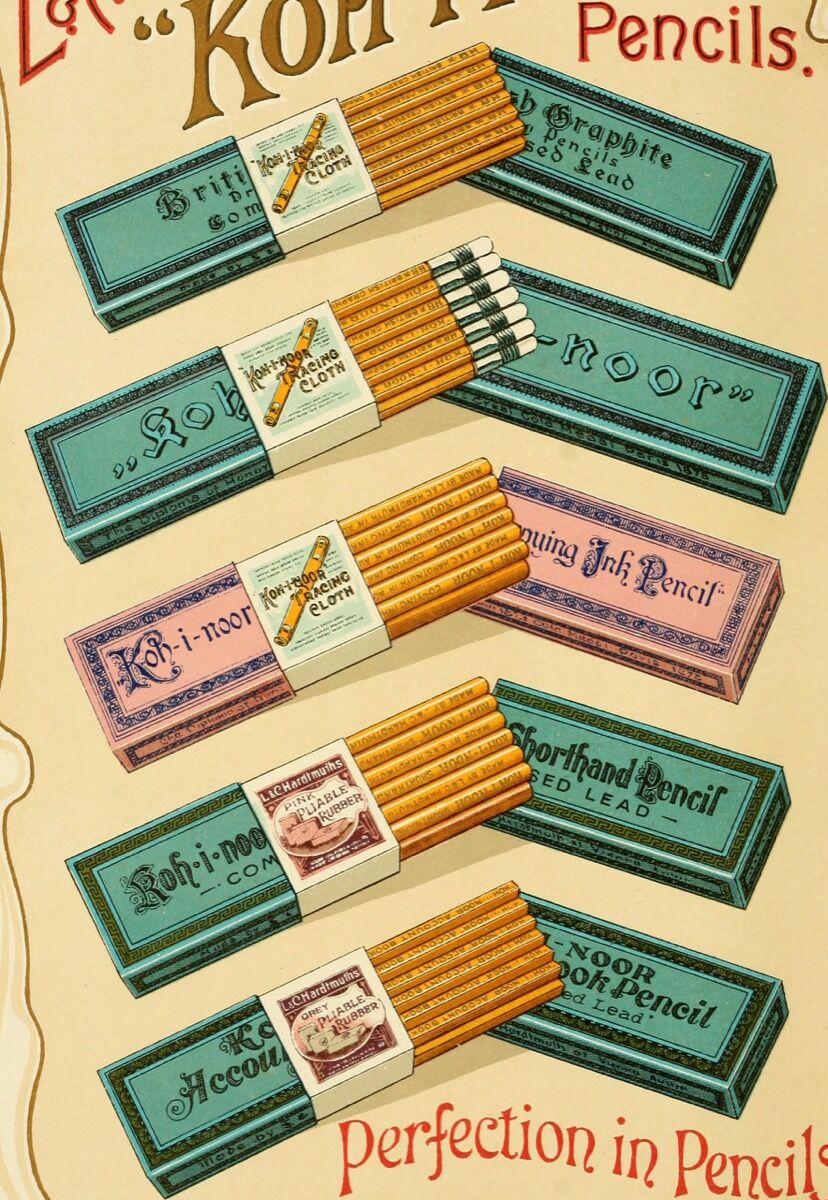 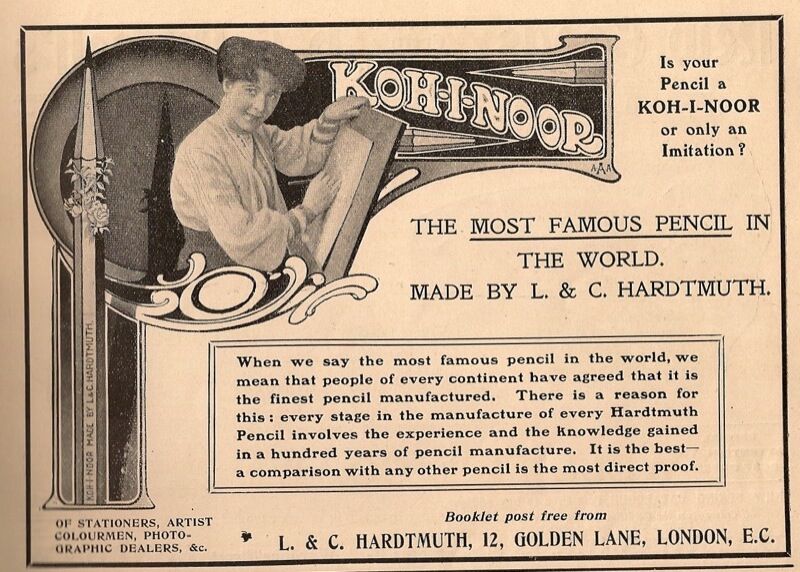 Koh-I-Noor Pencil advertisement, 1906. Image via Flickr.
A number of pencil manufacturers, including Hardtmuth, now sourced their graphite from Siberia—the vast Russian province which shares borderland with China. That geographic proximity was key for Hardtmuth as it devised its marketing scheme.
In China, yellow had long been tied to royalty. The legendary ruler considered the progenitor of Chinese civilization was known as the Yellow Emperor; thus, centuries later in Imperial China only the royal family was allowed to wear yellow. Eventually, the shade came to represent happiness, glory, and wisdom.
Hardtmuth settled on yellow to communicate the graphite’s geographical origins, while also linking its product to the long-held Chinese associations of royalty, and therefore superiority.
To further emphasize the point, Hardtmuth dubbed its new line of yellow pencils “Koh-I-Noor” after the world-famous diamond from the British Crown Jewels. “Diamonds are graphite, and the name Koh-I-Noor—being the name of such an exquisite diamond—was deliberately chosen to suggest the quality of graphite in the pencil,” Petroski noted. So popular was its yellow pencil that the company actually changed its own name to Koh-I-Noor Hardtmuth. 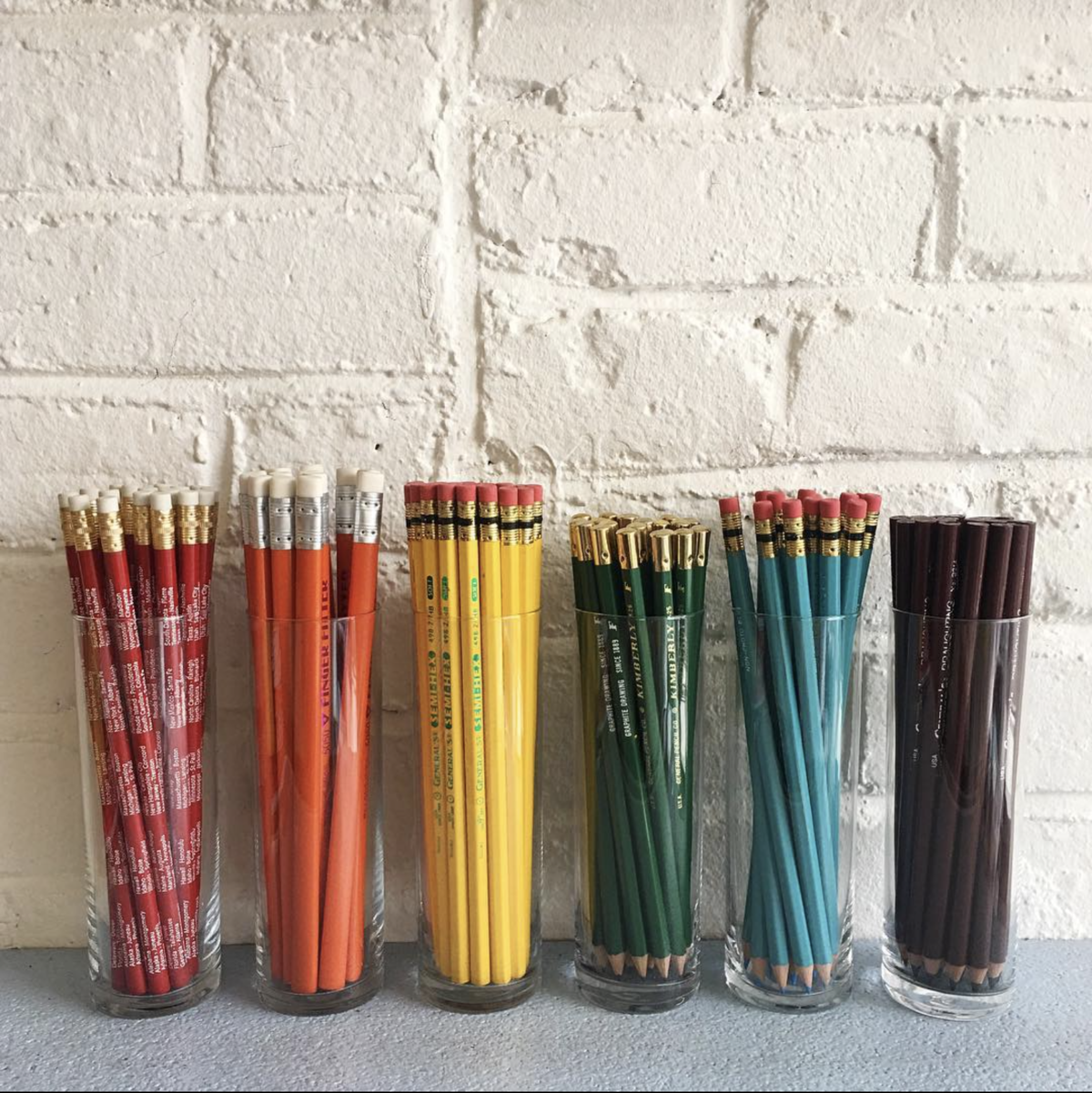 Photo by @cwpencilenterprise, via Instagram.
Although Koh-I-Noor Hardtmuth was the first to produce yellow pencils, Faber and Dixon Ticonderoga followed close behind. (The latter is now responsible for the ubiquitous HB 2 pencil required for standardized tests.) “Competing pencil makers colored their pencils yellow and gave them Oriental names to suggest that the graphite they contained was equally good,” Petroski said.
And it worked. An oft-repeated bit of pencil lore tells of an experiment conducted by Faber in the middle of the 20th century. The company distributed 1,000 pencils—half yellow, half green—to a test group. While both sets of pencils were identical apart from their color, the green pencils were returned en masse with complaints about their shoddy quality.
Of course, not all pencils today are painted yellow. Many are the color of a company logo or a university sports team or, in the case of the mechanical pencil, not painted at all. But the pencil as we conceive of it, the pencil of a Google image search or an elementary school memory, is—because of the marketing genius of 19th-century pencil manufacturers—yellow.