The soft wind comes sweet in the night
on the mountain. Invisible except for
the sound it makes in the big poplars outside
and the feel on his naked, single body,
which breathes quietly a little before dawn,
eyes open and in love with the table
and chair in the transparent dark and stars
in the other window. Soon it will be time
for the first tea and cool pear and then
the miles down and miles up the mountain.
“Old and alone,” he thinks, smiling.
Full of what abundance has done to his spirit.
Feeling around inside to see if his heart
is still, thank God, ambitious. The way
old men look in their eyes each morning.
Knowing she isn’t there and how much Michiko
isn’t anywhere. The eyes close as he remembers
seeing the big owl on the roof last night
for the first time after hearing it for months.
Thinking how much he has grown unsuited
for love the size it is for him. “But maybe
not,” he says. And the eyes open as he
grins at the heart’s stubborn pretending.

“Getting Old” by Jack Gilbert, from Collected Poems. © Knopf, 2012. Reprinted with permission. (buy now)
It’s the birthday of famous poet Jack Gilbert (books by this author), born in Pittsburgh, Pennsylvania (1925). He failed out of high school and found jobs as a pest exterminator and a steel worker. He was eventually admitted to the University of Pittsburgh without a high school degree — apparently on a clerical error. One of his classmates was Gerald Stern, who wrote poetry; after they became friends, Gilbert decided to try writing some poems of his own.
When he published his first book, Views of Jeopardy (1962), he won the Yale Younger Poets prize and became an instant celebrity. He had photo spreads in Glamour, Vogue, and Esquire; famous poets praised him publicly; and Views of Jeopardy was so popular that it became the most stolen book from American libraries. He said: “I enjoyed those six months of being famous. Fame is a lot of fun, but it’s not interesting. I loved being noticed and praised, even the banquets. But they didn’t have anything that I wanted. After about six months, I found it boring. There were so many things to do, to live.”
So he left the country. He had been awarded a Guggenheim Fellowship, which meant $5,000 and the chance to travel in Europe, and for the next two decades, he rarely returned to the United States. He lived in Greece, Denmark, and England with his partner, the poet Linda Gregg. She said: “All Jack ever wanted to know was that he was awake — that the trees in bloom were almond trees — and to walk down the road to get breakfast. He never cared if he was poor or had to sleep on a park bench.” After they broke up, Gilbert fell in love with a sculptor named Michiko Nogami, and he moved with her to Japan. During all those years, he didn’t publish another book — when he was asked why, he said that he was spending his time falling in love with those two women.
In 1982, he published his second book, Monolithos. That same year, Nogami died of cancer; she was just 36 years old. Gilbert wrote a chapbook dedicated to her, Kochan (1984), and then once again didn’t publish for a decade. He continued to travel; he never owned a home, and drove a car only twice. He managed to annoy a lot of his contemporaries because he was so critical — in 1962, he announced: “If 99 percent of the poets writing today stopped publishing, it would not be a loss.” He didn’t like poets who had nice comfortable jobs at universities, and who wrote impressive-sounding poems about things that didn’t matter much. He said that most American poets didn’t even actually want to write poems, but had to in order to keep getting grants and positions. He said: “If he’s a man teaching at a university, as he probably is, and married to a wife he courted years ago, and has several quite healthy children […] what’s he going to make his poems out of? […] He’s unlikely to be what the Elizabethans admired so much, an over-reacher. You aren’t likely to get a big-boned poem straining its limits. […] They reduce poetry to something toilet-trained and comfortable.” He said that the only things really worth writing about were these: “Love, death, man, virtue, nature, magnitude, excellence, evil, suffering, courage, morality. What is the good life. What is honor. Who am I.”
After Monolithos, he wrote just three more books of poetry: The Great Fires (1994), Refusing Heaven (2005), and The Dance Most of All(2010). When his Collected Poems was published in 2012, all of his work fit in its 400 pages. Gilbert died later that year.
Jack Gilbert said: “It’s not a business with me. […] I’m not a professional of poetry; I’m a farmer of poetry.”
Source: deatheternity.blogspot.com 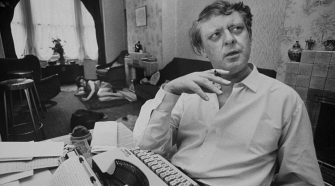 Fiction breaks down social isolation and creates a sense of belonging, argues the author and former psychoanalyst  Books and bonds … Nicole Kidman as Isabel Archer in the 1996 film adaptation of The Portrait of a Lady. Photograph: Allstar/Propoganda Films One of my maxims as a university teacher of literature was: “A great novel not …