Khine, an artist based in Yangon, doesn’t think of himself as political. Right now, he says, he’d much rather be creating paintings of imagined scenes. But since Myanmar’s military coup on Feb. 1, he’s been making something different: “counter-propaganda”—posters and stickers meant to inspire civil disobedience and criticize the military junta. “What me and other artists are making right now is not art,” says Khine, who gave a pseudonym out of fear for his safety. “But it’s what the time calls for, and it’s what I’m feeling right now.”

Khine, who is in his mid-20s, is part of a community of artists based in Yangon, Myanmar’s largest city, that is creating striking, often satirical images and circulating them as part of the civil disobedience campaign on social media and out in the streets. The images feature ironic slogans, comical illustrations of military leaders and the three-fingered salute popularized during last year’s pro-democracy protests in Thailand. Khine says artists are responding to the coup with wit and an “abundance of energy.”

The work by Khine and his fellow artists shows just how much the protest movement has changed from the street clashes of 2007 and 1988, when Myanmar was largely isolated from the rest of the world by decades of brutal military rule. Driven by young Burmese who came of age with internet access and the comparative freedoms of the last decade, the civil disobedience movement is being organized online, particularly on Facebook, which is hugely popular in the country. Protesters are sharing images across social media, and have looked to the tactics and slogans of movements in Hong Kong and Thailand for inspiration.

The military junta has responded with internet blackouts and by introducing a new draconian cyber-security law that targets internet providers and social media. And military leaders are starting to show that they are willing to return to the kind of violent repression that marked earlier protests.

On Tuesday, police shot a woman in the head—reportedly with live ammunition—during a demonstration in the capital Naypyidaw, and three people were wounded when police fired rubber bullets to disperse crowds in protests in the country’s southeast on Friday. The 19-year-old woman remains in a critical condition in hospital, according to Human Rights Watch. Khine says he and many of his friends fear a return to the oppressive control that has marked most of Myanmar’s modern history. “This year is the final battle,” he says. “Either we win, or we stay 20 more years under the military dictatorship.”

How artists are responding to the coup

That’s why the response to the coup from Myanmar’s thriving arts community has been unified, Khine says. Friends have printed out stickers with his illustrations urging disobedience and stuck them up around Yangon, and he has been writing and drawing signs for people to take to protests. As the artists’ work has spread on Burmese social media, young people have found the images online and reprinted them. Turnout in the streets has been sustained; according to Reuters, hundreds of thousands of people protested across the country Friday in the biggest day of mass demonstrations since the coup.

Their work is also interacting with public space. Artists, including Khine, have banded together to project large-scale versions of their work featuring the three-finger salute onto buildings in Yangon every night at 8 p.m.—to coincide with a popular demonstration by the city’s residents banging pots and pans from their doorways. “It felt beautiful, it felt like something we had to do,” says Khine. 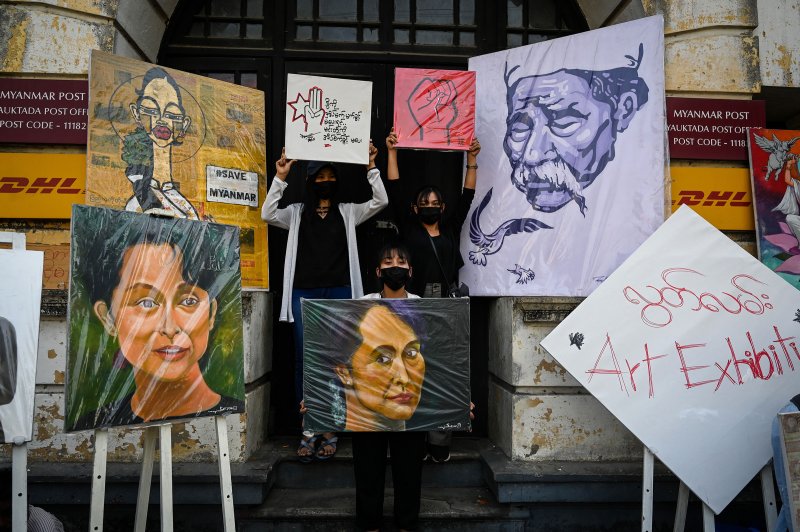 Protesters stand next to portraits of Aung San Suu Kyi and other artwork during a demonstration against the military coup in Yangon on Feb. 9

The threat of a new cyber-security law

Although society opened up in Myanmar after democratic leader Aung San Suu Kyi’s National League for Democracy (NLD) came to power in 2015, archaic and colonial-era laws on censorship stayed in place, and there were also clampdowns on creative expression. “Her government did not prioritize or show as much respect for free expression, creative freedom and human rights as many people were hoping they would,” says Karin Karlekar, director of Free Expression at Risk Programs at PEN America. According to the organization’s Freedom to Write Index in 2019, Myanmar ranked as having the sixth highest numbers of writers, creatives, artists and intellectuals behind bars in the world. Khine says the situation was still better than under military rule. He voted for the NLD because he was scared of even greater clampdowns on expression.

A new cyber-security law proposed by Myanmar’s military, dated Feb. 6 and circulating on social media on Thursday, threatens to make that fear a reality. According to an English-language translation of the draft law, it mandates that Internet service providers remove online content “causing hate, disrupting the unity, stabilization and peace” of Myanmar. Some proposed offenses, including “creating misinformation and disinformation with the intent of causing public panic,” carry up to three years in prison and hefty fines. NGOs across Myanmar decried the bill as a violation of human rights, including “the rights to freedom of expression, data protection and privacy, and other democratic principles and human rights in the online space” in an online letter with more than 160 signatories.

“The Myanmar military junta has now made its plan clear: throttle the Internet with restrictions and blockages, and then use a draconian new law to selectively arrest and punish those who are conveying news and information the military doesn’t like,” Phil Robertson, Deputy Asia Director at Human Rights Watch, told TIME via email Thursday. Robertson says the move by Gen. Min Aung Hlaing and the State Administrative Council is intended to gag Myanmar’s Internet, and aims to suppress the rapidly growing civil disobedience movement opposed to military rule. 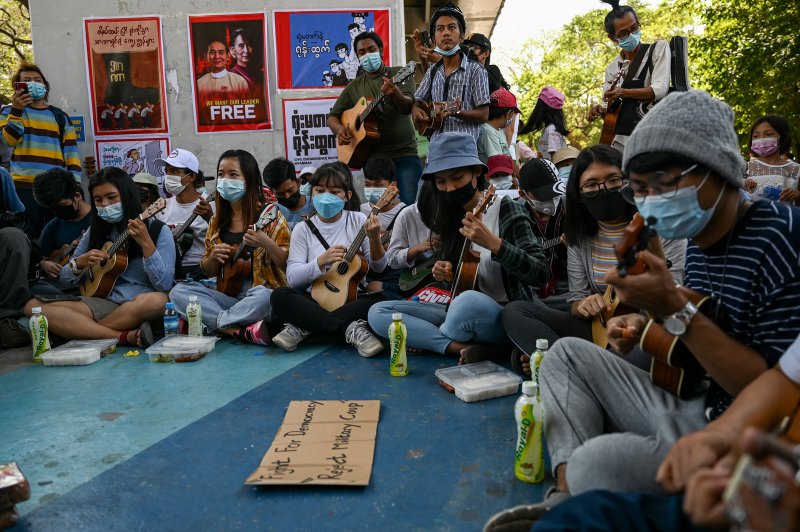 Musicians take part in a demonstration against the military coup in Yangon on Feb. 11

‘Our generation will troll the government’

But rapid technological development in recent years won’t make this easy; Myanmar has one of the fastest growing telecom markets worldwide, with mobile telephone signals covering 90% of its territory since 2014. “The military didn’t count on how ten years of the Internet has fundamentally changed the way Burmese communicate,” says Robertson. “The [military junta] will find it’s not so easy to stuff the genie of online expression in Myanmar back into the bottle.”

For artists like Khine, there’s no going back from the freedom that came with access to information, and the speed at which social media users can share digitally-created, pro-democracy images. “We’ve got the Internet, we have seen Black Lives Matter, we have seen the Hong Kong protests,” says Khine. “We have seen everything. Our generation will troll the government with civil disobedience.”

An image of three-finger salute is projected on a building during a night protest against the military coup and to demand the release of elected leader Aung San Suu Kyi, in Yangon, Myanmar, Feb. 9, Reuters

The Rise of Therapy-Speak – Katy Waldman, The New Yorker

How a language got off the couch and into the world   First, let’s survey the situation. It’s as though the haze of our inner lives were being filtered through a screen of therapy work sheets. If we are especially online, or roaming the worlds of friendship, wellness, activism, or romance, we must consider when …