‘The arts play a crucial role in changing the world,’ stated human rights advocate director Farah Nabulsi, whose biggest cause is the Palestinians suffering under occupation.

Palestinian-British director Farah Nabulsi’s short film ‘The Present’, which was unveiled on Monday among the nominees of the 93rd Academy Awards for the best live action short film category, will be exclusively available for live streaming on Netflix starting Thursday.

“The Present is debuting globally on Netflix (Except France & Japan) and will be available in Arabic with English subtitles,” stated the leading streaming platform which has over 200 million users from 190 countries.

“Netflix’s latest addition to the short Arab movies list comes as a part of its commitment to presenting Arab stories to the world, and its belief that great stories can come from anywhere,” added Netflix’s statement on Tuesday.

The short movie sheds light on how Palestinians are deprived of the basic right of freedom of movement, telling the story of a Palestinian man and his young daughter who set out in the West Bank to buy his wife a gift, showcasing the struggles they go through between occupation soldiers, segregated roads, and checkpoints.

“Arts play a crucial role in changing the world and I believe film precedes them all. It gives voice to the silenced, thereby helping build the empathy and understanding needed to effect change,” stated the active human rights advocate Nabulsi about her directional debut. 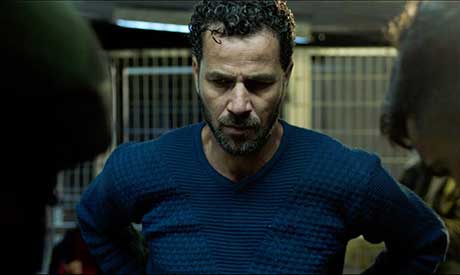 A still Photo from ‘The Present’, the debut short film of Palestinian director Farah Nabulsi competing for an Oscar

In addition to the Oscar nomination, the short film has also been shortlisted as a nominee for Best British Short at the (BAFTA), in addition to several awards and nominations in dozens of international festivals.

Farah Nabulsi has been in the filmmaking business since 2015. She is currently working on her first feature-length film. She founded a production company through which she writes, produces, and directs fiction films “exploring topics that matter to her, and she created a digital resource to deconstruct the Israeli military occupation of Palestine in a way never done before,” as her website states.

Arab filmmakers are making an inspiring impact globally in recent years. Another Arab Oscar nomination revealed on Monday was ‘The Man Who Sold His Skin’, written and directed by Tunisian filmmaker Kaouther Ben Hania, which is competing for the best international feature film category.

Source: 60 Minutes CBS, Jon Wertheim, 26 December 2022 We’re 40 days away from the 2022 Winter Olympics in Beijing, games that come wreathed in controversy. To many, China is a problematic host, given the country’s human rights abuses and hard authoritarian turn. One of the loudest voices condemning China is not a voice at …