On social media, Refaat Alareer rages against Israel. In the lecture hall, he studiously analyzes the work of some of its leading poets — and surprises some of his students.

GAZA CITY — Forty-five minutes into his first seminar of the morning, a Palestinian professor at Islamic University in Gaza City had a question for his 70 literature undergraduates: Who had written the unsigned poem they’d spent the class reading?

To the students, all women, the poet’s identity, or at least background, was obvious.

This was a text about Jerusalem, a city that they, as young Palestinians unable to leave Gaza for most of their lives, had long cherished but never visited. And the poem was written from the perspective of a wistful onlooker who, like them, loved but could not enter the city.

On a roof in the Old City

the white sheet of a woman who is my enemy,

the towel of a man who is my enemy

Sondos Alfayoumi raised her hand. The poem was by a Palestinian, gazing from a distance at an Israeli’s laundry, reckoned Ms. Alfayoumi, 19. “It shows a man who cannot get access to something that belongs to him,” she said. “A man working in the occupied territories.”

The class nodded in agreement. Only a Palestinian could have written with such warmth about Jerusalem, a second student said. 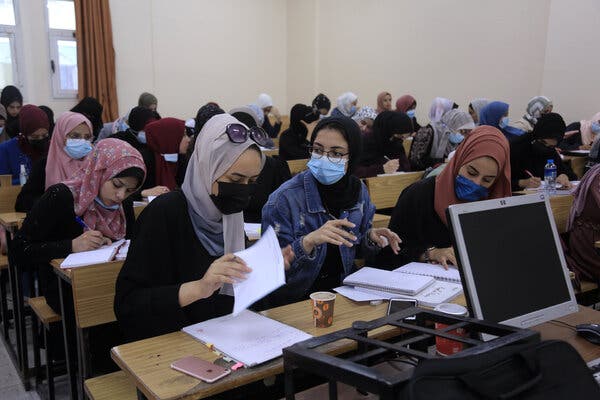 But the professor, Refaat Alareer, had a surprise waiting. “The poet of this really beautiful piece is actually not a Palestinian,” he said.

There was a hubbub of murmuring as it dawned on the class what this meant. Someone gasped, and Ms. Alfayoumi suppressed a shocked laugh.

It was a moment that added nuance to two contrasting narratives: That embraced by the students themselves, many of whom knew someone killed or injured by Israeli missiles, and whose interaction with Israel is often limited to airstrikes; and that of many Israelis, who often assume the Palestinian education system is simply an engine of incitement.

Here was an appreciation of one of Israel’s best-loved poets from a Palestinian professor at a university co-founded by the former leader of Hamas, the militant group that runs the Gaza government, does not recognize Israel, and was responsible for dozens of suicide attacks on Israelis. Experts say the study of Israeli poetry in Palestinian colleges is rare, though not unheard-of.

What Mr. Alareer admired about the poem, “Jerusalem,” he told his students, was the way it blurred divisions between Israelis and Palestinians and implied that “Jerusalem can be the place where we all come together, regardless of religion and faith.”

“When I read this,” he added, “I really was like, ‘Oh my god, this is beautiful. I’ve never seen something like this. I never thought that I would read it.’ And then I realized: No, there are so many other Israeli people, Jewish people, who are totally and completely against the occupation.”

Mr. Alareer, 42, is not an obvious champion of Hebrew poetry. 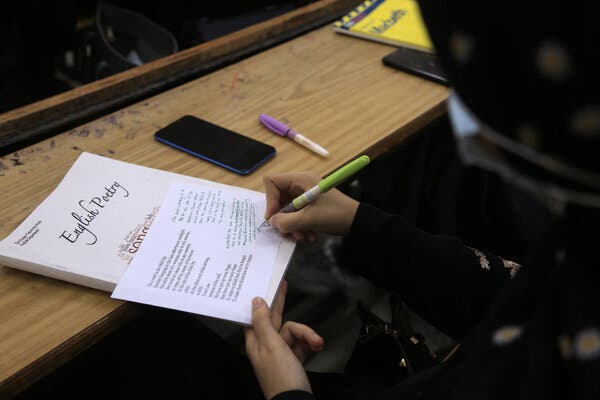 The Israeli and Egyptian blockade of Gaza has stymied his academic career, at times stopping him from studying abroad. He has relatives in Hamas, and his brother was killed during the 2014 war with Israel. He has served as co-editor of two books of essays and short fiction about the struggles of life in Gaza.

And on social media, he frequently writes furious barrages that describe Israel as a source of evil, posts that led to the suspension of his Twitter account. In one post he wrote: “No form, act, or means of Palestinian resistance whatsoever is terror. All Israelis are soldiers. All Palestine is occupied.”

But in the lecture theater, Mr. Alareer has a milder academic approach. As part of a course for undergraduates about international literature, he teaches work not only by Mr. Amichai but also Tuvya Ruebner, another prominent Israeli poet. He introduces students to “The Merchant of Venice” and “Oliver Twist,” and encourages his classes to empathize with the texts’ Jewish characters, Shylock and Fagin.

While Shylock and Fagin, two complex characters who have spurred debate for centuries but are widely considered antisemitic caricatures, might seem like odd choices to teach Palestinians about empathy, Mr. Alareer encourages his students to empathize with them as victims of a bigoted society.

Perhaps the most moving moment of Mr. Alareer’s teaching career, he wrote in an essay in 2015, “was when I asked my students which of the characters they identify with more: Othello, with his Arab origins, or Shylock the Jew. Most students felt they are closer to Shylock and more sympathetic to him than to Othello.” 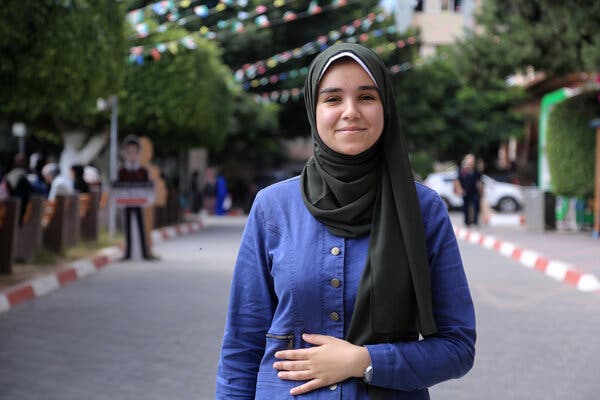 His students had interpreted Mr. Amichai’s poem as a depiction of Palestinians cut off from Jerusalem by a wall built during the 2000s. But the revelation of the poet’s identity was a reminder of how Jews were blocked from the city’s ancient center when Jordan controlled the Old City of Jerusalem between 1948 and 1967.

In the sky of the Old City

At the other end of the string,

because of the wall.

“As Palestinians, do we have any problem with Jews, as Jews?” Mr. Alareer asked his class. “No, it is a political kind of struggle.”

Mr. Amichai died in 2000. His widow, Chana Sokolov, and son, David, later said that while they disagreed with the content of Mr. Alareer’s social media posts, they were inspired by his use and interpretation of the poem.

“My father would probably be very pleased to hear that people are using poetry to see the humanity on the other side,” said David Amichai, who researches antisemitism at the Hebrew University of Jerusalem. “It is very moving that he uses this poem to try to teach about Israeli society,” Mr. Amichai added.

For some of Mr. Alareer’s students, the poet’s Israeli identity came as a minor epiphany.

“Maybe this changed something in my mind about their experience,” Ms. Alfayoumi said. “It’s like we share things. We relate.”

But then she stopped herself. There was a limit to how much empathy she felt for a nation whose warplanes had bombed Gaza for 11 consecutive days earlier in the year.

To Israelis, Hamas was the instigator of the fighting in May: War broke out after Hamas fired several rockets at Jerusalem, and continued to aim thousands more unguided missiles toward many Israeli cities.

But to Palestinians like Ms. Alfayoumi, Hamas was responding to Israeli actions in Jerusalem, including raids on the Aqsa Mosque. And the final death tolls were asymmetric, with Gaza suffering nearly all of the more than 260 deaths of the conflict.

“In the end, the gap in our experiences is huge, when you compare their losses to ours, and compare their luxury life to ours,” Ms. Alfayoumi said. “We may relate and share things — but at the end of the day they have to admit what they have done.”

Another student said she couldn’t believe an Israeli had actually written the poem, even after Mr. Alareer had revealed who he was.

“I still insist that this is Palestinian,” said Aya al-Mufti, 19, citing the use of the phrase “the Old City,” which she believed only an Arab would use.

Mr. Alareer said that was her right: The meaning of any text was open to the interpretation of its readers. But he still bristled slightly, and gently hinted that she hadn’t absorbed the main point of the class.

“If you want to occupy the poem,” he said, with a flash of sarcasm, “good for you.”

Julio Cortazar, an Argentinian writer mainly known for his novels and short stories, was also a terrific poet. Enjoy this film of his poem “Para Leer en la Forma Interrogativa”. Full text of the poem below as well as a translation. Recited by Carlos R Baron Directed by Mike Gioia Cinematography by Nate Brice Coloring …

Memories of my father. Published on October, 7 2019 by The New Yorker Illustration by Emiliano Ponzi Of course I have a lot of memories of my father. It’s only natural, considering that we lived under the same roof of our not exactly spacious home from the time I was born until I left home …